The wall of separation 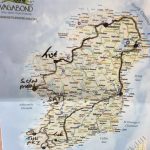 Our tour of Ireland started in Dublin and and  continued South around the bottom of the island, then up the West coast to the Giant’s Causeway in the North, ending in Belfast. Some tours go the opposite direction from Dublin to Belfast. I was happy that we got the southerly route. 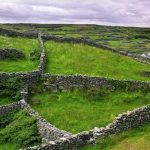 We had 9 days to observe the beautiful countryside, see ancient ruins, and absorb history. And yes, we saw many walls ( I wrote about them here). Ireland has a seemingly unending supply of rocks that have been cleared from fields to create low walls, separating the grazing lands of different farmers. These walls are functional and an integral part of Ireland’s charm.

When we arrived in Belfast, the capital of Northern Ireland, we took the Black Cab tour and were presented with another wall, a wall entirely without charm.  I’m sure most of us are familiar with the “troubles” in Northern Ireland and the conflict between between unionists (those that want to remain part of the United Kingdom, largely Protestant) and the republicans (those who would like to be part of a single united Irish republic, largely Catholic).

I was well aware of this conflict, had read about it, and had watched several movies about it, but was still unprepared for what we saw. We were taken to view a wall (called a peace wall) in West Belfast that separated the republican neighborhood of Falls Road from unionist Shankill Road. The concrete portion of the wall is 25 ft, but above the concrete were two additional sets of fencing topped with barbed wire, reaching 48 ft high. These were added after incendiary devices were lobbed over the 25 ft wall.

To help you understand the immensity of this wall, by contrast, the Berlin wall  was 11.8 feet high and the separation barrier between Israel and Palestine is 25 feet.

The wall we viewed has six gates that are locked at night, effectively closing off these two neighborhoods.

The walls have become a place of creative expression covered with graffiti paintings and signed messages of hope, including prayers for peace.  The walls are painted over periodically, and fresh grafitti begins again.

I found the whole experience heartbreaking: this wall was such a visible sign of social brokenness and despair. I wrote a scripture on the wall and signed it in hope that God would do a miracle of reconciliation for this community, while praying also for myself that God would show me any ways I am cutting myself off from others.

This wall was a powerful and graphic reminder of how important it is to not let a root of bitterness grow, like these walls have higher and higher, with more and more layers. What can stop this terrible progression?  Only the wall crushing power of resurrection life in Christ.

For he himself is our peace, who has made the two groups one and has destroyed the barrier, the dividing wall of hostility. Eph 2:14