Voodoo and the Haitian World View 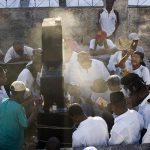 In Haiti, the presence of Voodoo is a pervasive undercurrent in daily life. But its influence becomes especially pronounced during the months of October and November. Fet Gede (All Souls Day) is a national holiday in Haiti celebrated on November 1 and 2. Many Haitians will visit cemeteries to pray to ancestors; offer food, drink and flowers; and light candles for the dead. Celebrations and dancing continue often for the entire night.

The celebration of Fet Gede and All Souls Day combines Voodoo practices with a Catholic religious holiday in a way that magnifies the forces of darkness. As a result, the weeks leading up to this celebration can be particularly difficult for those holding fast to the Word of God and His truth.

Please take time to pray this week for those on the frontline of spiritual battle in Haiti. Here are some ways you can pray.

If you would like to know more about Voodoo and how it affects the Haitian worldview, read the details below.

Why Voodoo in Haiti?

The influence of Voodoo is a pervasive factor in Haitian life and culture. Most visitors from America have only a comic book understanding of Voodoo that trivializes it into something childish or even funny. However, Voodoo is actually a living part of the inheritance of the people of Haiti from their African roots and indigenous religious practices and has serious repercussions for those living under its influence.

Some commentators have described Haiti as “90 percent Catholic and 100 percent Vodun.” Of course this ignores the real followers of Jesus who know the true and living God through Jesus Christ. According to the CIA World Factbook, the religious demographics of Haiti are: Roman Catholic 80%, Protestant 16%, none 1%, other 3%. But within these statistics, it is a fact that most Haitians are involved in Voodoo, some deeply and other marginally.

Understanding how Catholicism combined with African religious practices in the history of Haiti helps to understand the cultural barriers that prevent Haitians from receiving the true liberating gospel of Jesus. 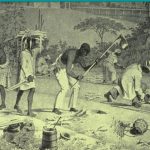 A key fact to know about Haitian history is that the form of slavery practiced in Haiti by the French was particularly heinous. Amy Wilentz brings this out clearly in her book Farewell Fred Voodoo. Unlike the slavery practiced in America, the French land owners did not see the slave as an investment to be cultivated, or even as a beast to be cared for like sheep or cattle, but as fuel to be consumed. It is reported that 1/3 of the imported slaves died within a few years. Slaves were not encouraged to marry and have children, but were simply replaced by new slaves when they died.

At the same time, slaveholders were under pressure because of their Catholic allegiance, to Christianize this “disposable fuel.” The result was that the slaves gave lip service to Catholic forms, but were driven deeper into their own practices brought over from Africa. 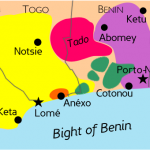 Many of the Africans brought to Haiti as slaves came from tribes such as the Fon and Ewe in Nigeria, Benin, and the Congo, tribes that had a highly developed spiritual worldview. In this worldview, the creator god is largely unknowable. Instead, worship is directed to lower spirits call Lwa who control various aspects of life. Each lwa has a distinctive personality. Voodoo practices are focused on gaining the favor of specific lwa through acts of devotion, ceremonies, offerings, and by cultivating personal relationships with the Lwa, even to the point of spirit possession. During Voodoo ceremonies, the Lua are often invited to come and manifest themselves. 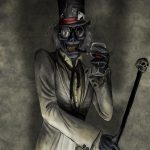 Fet Gede, the Haitian Day of the Dead, focuses on a spirit named Baron Semedi who is head of the Gede family of Lwa. Baron is a particularly evil Lwa. He is noted for disruption, obscenity, debauchery, and having a  fondness for tobacco and rum. As lord of the dead, he can also remove curses that cause death and receives offerings to do so.

The combination of Fet Gede with the All Souls Day  illustrates how the world view brought from Africa adapted to Catholicism through a process known as syncretism, a word which describes how contradictory beliefs are combined within a culture. The various Lwa became associated with specific Catholic saints who also in the Catholic worldview, represented intermediaries between men and a God who was disinterested or too busy to be involved in personal affairs.

The actual practice of Haitian Voodoo is complex because of the large number of Lwa, grouped in distinct nations and families with different characteristics and preferences. But the essence of the worldview is simple and based on a set of lies that form a spiritual and cultural stronghold. Voodoo starts with an indifferent God. Christianity starts with a loving God, who demonstrated His love toward us in that while we were still sinners, Christ died for us. Voodoo looks to many spirits to influence events and give one power. Christianity proclaims one mediator between God and man, the Man Christ Jesus. Jesus is the true Lord and Giver of Life, who opens the way to eternal life to all who believe in Him.

Pray for the Spirit of God to move in demonstration of power and might as Haiti celebrates Fet Gete. Our God is mighty to save.

The personal experience of Patrick Bellegarde-Smith, a PhD holding professor at the University of Wisconsin and also a Voodoo high priest, speaking on NPR 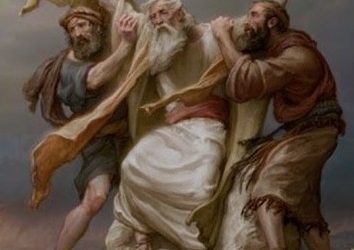 Encouragement for Intercessors: new depth in a familiar story Then Amalek came and fought with Israel at Rephidim. So Moses said to Joshua, “Choose for us men, and go out and fight with Amalek. Tomorrow I will stand on the top of the hill with the staff of God in my... 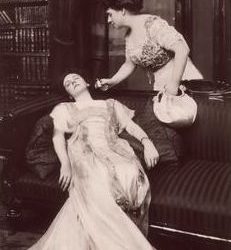 Smelling Salts for the Faint of Heart

Recently, I had the privilege to join with others in praying for a friend who leaving for a distant country to volunteer at a conference for women missionaries in the Middle East. The purpose of the conference is to allow these women a respite from their daily labors,...